I just updated our installation to 2.12 and now Import Micrographs appears to be broken, giving this error message:

Nice catch- if you run cryosparcm update again you’ll get the fix (v2.12.2). Sorry about that!

This may be a similar issue, because there is no “Override Exposure Groups Id” box in Import Micrographs?

I am also having the exact same problem with 2.12 (which was updated today)

I get this error, too. Unable to import any mics with the above error.

I too am getting this error. We are running v2.12.2. I’ll double check that. If I find a solution I will get back to you all.

Downgrading - thank you @drawoliver - worked for us as well.

Yes. It seems that downgrading to v2.11 worked.

Got the same error when importing particles.

Did you find a solution ?

Can you post the error you received for import particles?

The import micrographs fix should be released today, as well as a few other fixes.

When I tried to import a particles.star from an extract job of Relion I got that :

I believe your builder is out of sync with the application. Please restart cryosparcm restart then run cryosparcm cli "refresh_job_types()"

I’ve been running into some problems with importing Micrographs in this version but also 2.12.2 as a whole.

I get the import error with this (even after following the above refresh etc):

When running full frame correction or patch motion correction I get the error below when it get to the end of the run. 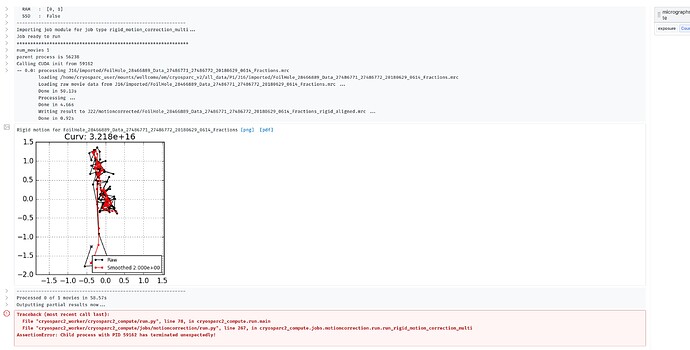 As you can see it appears the motion correction has actaully run but has failed to complete properly.

Movies are gain corrected ‘.mrc’ collected in linear mode with 79 frames with a total dose of 80 e.

As far as I can tell doing this with ungain corrected ‘.tiff’ files works.

Any help would be greatly appreciated.

EDIT2:
I’ve only had this work with the Relion test data.

I still have the same problem.

We have it as well…

Also have same problem. Has anybody found a solution?

I can confirm that a forced update, restart, and job list refresh doesn’t work. Has anyone tried a full reinstall?

I did same, didn’t work also. Have not tried full reinstall.

@stephan said they were working on a variety of bug-fixes, including this one, but they have not yet released another update.

This bug has been (actually) fixed! Update to cryoSPARC v2.12.4 (cryosparcm update) to get the latest fixes, which include: