It looks like something was rotated 90 degrees at some point, but I’m not sure what… or how to troubleshoot this.

Any insight would be appreciated.

Did you happen to import these movies as Micrographs, or did you use MotionCor2 from within cryoSPARC? If you imported movies into cryoSPARC, is it possible that the gain reference wasn’t flipped properly? You should be able to inspect the output images in the Overview tab of the Import Movies job and see if your gain reference was being properly applied.

I imported them as movies and then used MotionCor2 from within cryoSPARC.

The gain reference and movies are in the same orientation (3838x3110) when I import into cryoSPARC.

What should I be looking for in the overview of Import Movies to see if the gain reference was properly applied? Flipping in the X direction introduces obvious vertical artifacts but flipping in the Y direction looks comparable to not flipping at all.

I’ve never had to alter the gain reference file orientation with previous data from the same scope, but this is my first time using MotionCor2 within cryoSPARC. I usually use cryoSPARC’s own motion correction but I happen to be processing these at home and my workstation only has 4 CPU cores, which apparently isn’t enough for cryoSPARC to run motion correction.

The vertical patterns are definitely a sign of an incorrectly flipped gain reference. Is it possible if you can send us a screenshot of your tree view, which shows your workflow? https://cryosparc.com/docs/reference/general#card-tree-view
It could also be possible that MotionCor2 somehow flipped the output; is it possible if you can also send the command that MotionCor2 ran? You’ll find it in the Overview tab of the MotionCor2 job.

Here is a screenshot of my workflow, sorry for the low resolution. Hopefully you can make out the gist of it.

The command shown in the overview for the motion correction job is: 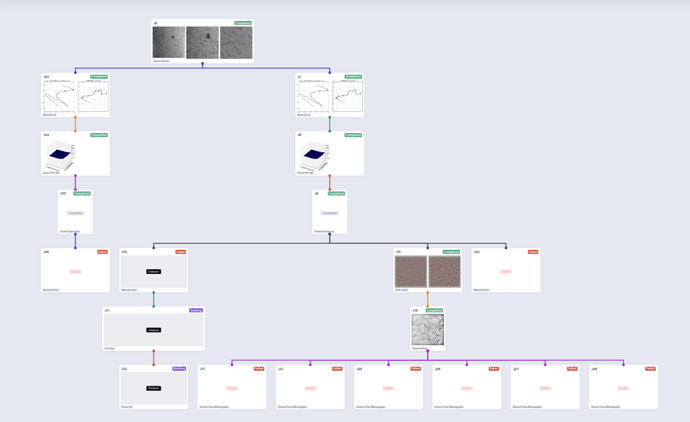 I am seeing an almost identical issue. All blobs are correct until the extraction. I posted separate but should be merged.

View of current steps up to extraction failure 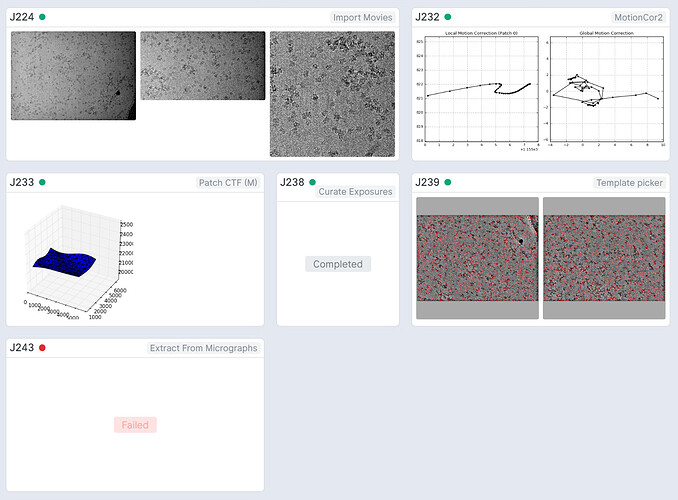 I found a work around.

After MotionCorr2. Use import micrograph to import the DW.mrc from the cryosparc output directory. Once imported you can run patch ctf, particle pick and extraction with no issue.

This work around also worked for me. Thanks for sharing.