Inflated FSC in both NU and Homogeneous Refinements

I am encountering some problems with certain subsets of my data, where the FSC runs off to the Nyquist frequency after the first few iterations of refinement (this occurs both in NU New and Homogeneous refinements). The unmasked FSC does eventually go to zero but the masked FSC will settle around a value higher than 0.143, suggesting some sort of overfitting caused by masking artifacts, however the maps do not appear overfit (espectially in the NU case), but just under-filtered. Even so the unmasked curve is sometimes unusually shallow, so the problems may be independent of masking.

I have checked for duplicated micrographs at the import micrographs step and tried the tool to remove duplicate particles, both to no avail.

Strangely this only happens when I use a subset of particles, either isolated using heterogeneous refinement or 3DVA, while consensus refinements of the whole dataset do not produce the same problem.

Here is an example FSC. In this case I would estimate the usable information in the map only extends to about 3.5 A resolution. 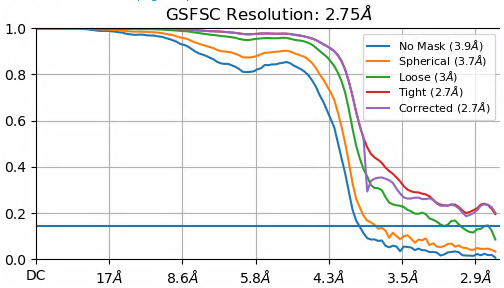 Any help is appreciated.

Additional information about my workflow:
Movies were motion corrected in Relion with MTF correction for K2@300kV supplied as an input.
Subsequent processing was done in CryoSPARC and two conformations were refined separately with NU-refinement. The halfmaps and angular priors from CryoSPARC NU-refinement were used for CTF refinement and Bayesian polishing in Relion. Particles were then 2D classified in CryoSPARC to remove defective particle images, after which I began noticing these problems in some of my 3D refinements.