We has encountered this http timeout error message for the past three weeks. Now it almost fully blocked our cryosparc usage. Here are the error message: 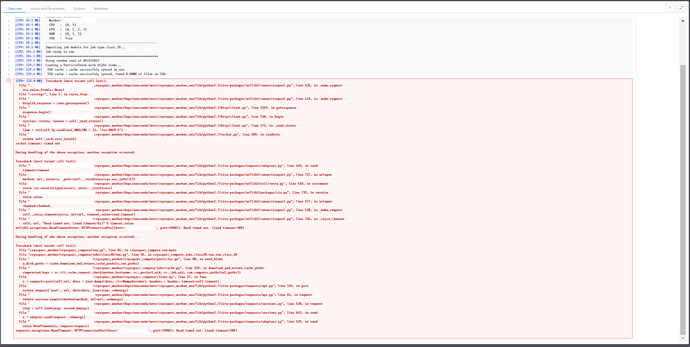 We tried to add the “export CRYOSPARC_CLIENT_TIMEOUT=1800” to the config.sh under the “cryosparc_master” folder. However, it looks like this environment setting was not used after restarting cryosparc with “cryosparc restart”. We still have the error message saying “timeout=300”.

The ports 39000-39010 have been opened for both master and worker node. Trying “curl master node:39002 from the worker nodes” can return “hello world” without issue.

Now if we run 2D or 3D jobs without an SSD, the chance of successful running will increase. But with SSD, jobs usually fail before transferring data and throw out the timeout error. It’s worth noting that the particle dataset was not large at all (only 20G).

The cryosparc version we use is 3.3.2. We have 1 master node and two worker nodes.

Any suggestions would be much appreciated!

if we run 2D or 3D jobs without an SSD, the chance of successful running will increase.

Please can you also define this variable in cryosparc_worker/config.sh.

We are using Lustre

Do you use Lustre for

Please can you also send me the output of
/path/to/cryosparc_worker/bin/cryosparcw env
via a forum direct message.

@Btz The change in cryosparc_worker/config.sh should be effective for jobs launched after the change. Do new jobs still show timeout=300?
Also:
What is the size of the $CRYOSPARC_DB_PATH directory?
On what type of storage is $CRYOSPARC_DB_PATH?

Yes. The jobs still show timeout=300 after the change in work config.sh. This is the similar as the heartbeat issue. It keeps reporting “30s no heartbeat” even if we have set the environment variable CRYOSPARC_HEARTBEAT_SECONDS=180 in both worker and master config.sh files.

The size of the database dir is 64GB.

The database dir is on NFS file system.

I am beginning to suspect a yet-to-be-identified network issue, which would have to be investigated locally.
There is also a small chance that reboots of the CryoSPARC master (after cryosparcm stop) and worker(s) may restore proper function.

We have tried to stop cryosparc and reboot master node and worker nodes. Unfortunately, it didn’t resolve the timeout issue. Do you have any clues what we should test locally for the network? Thanks for all the comments so far!

timeout error message for the past three weeks.

If similar tasks could be performed earlier, you may want to investigate changes around that time, for example:

As far as know, we didn’t do any updates for software, OS, computer hardware, or networks in the past few weeks.

However, we started to use cryosparc live few weeks ago. Since then, we usually run live jobs and normal jobs together under the same cryosparc installation. Will this lead to some communication issue between worker node and master node database?

Since then, we usually run live jobs and normal jobs together under the same cryosparc installation.

This should not be a problem unless a there is a misconfiguration or the workload overwhelms available resources. A few questions about your CryoSPARC master host:

3. Over what kind of network (Ethernet? How many Gbps?) is it connected to the file server that holds the CryoSPARC database?
The database is in a local SSD in the master node. The connection between master and worker is 1Gbps.

4. How heavy is the overall load on the file server that serves the database?
The ssd load in the master node is usually quite low.

@Btz Are you still experiencing this problem on your CryoSPARC instance?