I originally imported motion-corrected micrographs into cryoSPARC, and from these did CTF correction, particle picking and classification. I have now imported the raw .mrcs movies into cryoSPARC, hoping to perform a local motion correction job. Is it possible to link these movies to the originally imported motion-corrected micrographs, as currently I get the following error when trying a local motion correction job:

It is possible to do this by first manually linking the unique movie IDs to the micrograph IDs and doing full-frame motion correction on the movies first.

Immediately after running the Import Movies job, log in to the machine where cryosparc2_master is installed via Terminal and start the interactive CLI:

In cryoSPARC, start a “Full-frame motion correction (M)” job with the imported movies as input. 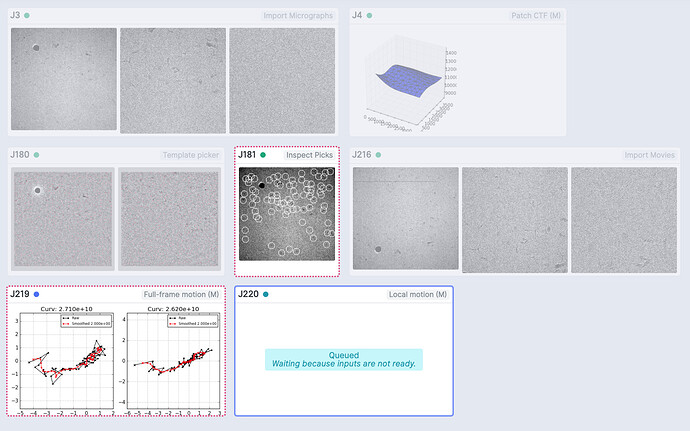 Hope that helps, let me know if you run into trouble with any of those steps.

Hi Nick,
Thank you for your help!
However I am still running into issues. I am working with three data sets that I am combining. I did the above uid modification and global motion correction seperately for all three datasets. I then tried combining all three with particles from later in my workflow for local motion correction. This ran for a couple of days and then came back as failed. Weirdly, if I do random subsets of 10 micrographs for each data set using the same particle stack the local motion corr job works. The job also fails when I try entire datasets individually.
I find this error at the end of the job.log file:

Why would this not be the case for the random subsets jobs that worked?

Hi @maxm, it looks like this happens because there are some micrographs without any particle picks. This should be fixed in the latest version of cryoSPARC v2.15, out today. Can you try updating and see if that fixes the issue?

If you can, try local motion correction on a smaller subset of micrographs that includes some without any picks, and if that works then the full run should work as well.

Thank You, this works well now