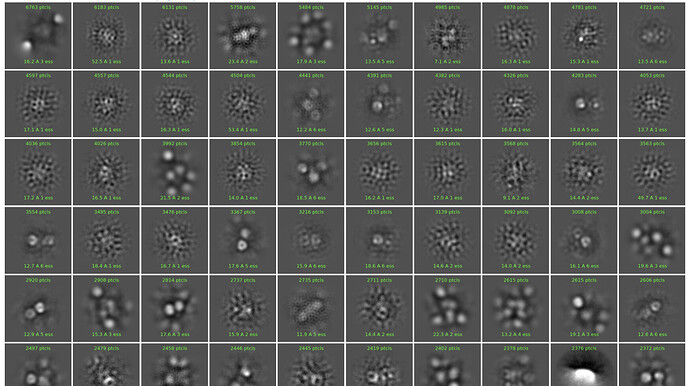 Are you talking about the white blobs? Those looks like particles to me. My assumption would be they don’t appear sharp because they are aligning relative to the orientation of neighboring particles, which is not consistent, and therefore they’re smearing out. What I would do is try running the inspect picks job, pick the particles with the highest cross-correlation, and then re-classify with a tighter mask and fewer classes to see if I could get a strong class. Then I’d re-pick the particles (or re-center them) of the whole dataset to try and get better centering, and then re-classify all those particles with the desired amount of classes (in this case, 200), and a somewhat tight mask, which will hopefully let you ignore the neighboring particles, and get sharper classes.

For example, one of my attempts I got particles like this:

image1959×195 64 KB
None of which were particularly sharp. I took the sharpest looking ones, however, re-centered my particles, and got this with the next 2D:

If there are lots of particles you still can’t get into a sharp class, but you’re convinced they’re protein, leave them out of your first ab initio and refinement, and trying adding them to a later refinement. Oftentimes, they’ll align better.

Thanks for your suggestions! However this is a protein with known structure which is not globular. We were just collecting data to test out a new microscope. Below are some good 2D classes of this protein from a previous dataset:

Did you use these particles as picking templates, out of curiosity?

yes. I tried particle picking both with and without using these as templates. Both are giving similar results in 2D classification.